The Heritage Guitar Company opened in April 1985 after Gibson had ceased production in Kalamazoo, Michigan six months earlier and relocated to Nashville. Some Gibson employees did not make the move and founded their own company in the former Gibson factory. Heritage guitars were and are still being built by former Gibson employees and some of the company's old manufacturing machines are still being used. Most Heritage guitars are based on the well-known Gibson models. 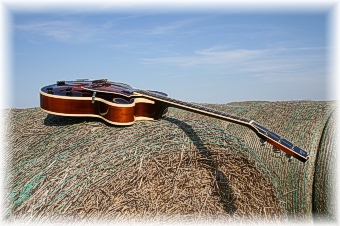 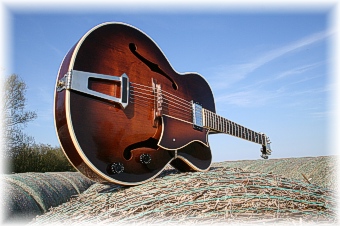 My Heritage Eagle is a solid archtop. Instead of the mahogany top of the standard model, it has a hand-carved spruce top. The back, sides, neck and even the pickguard are made of mahogany. It was manufactured in 1994, which can also be seen, for example, on the tailpiece a la Gibson ES175. The tailpieces of the newer Heritage models have an H as an ornament in the middle. A clear indication of the year of manufacture of the Heritage guitars is the letter in front of the serial number. The first models had a B for 1985. The K was then in 1994. My Heritage Eagle has a K in front of the five-digit serial number.

Such peculiarities are not necessarily uncommon with Heritage guitars. You can still register all sorts of special requests at Heritage in the Custom Shop manner, although each request naturally entails a surcharge. So my Eagle is a "custom-made product".

I have posted a little video on Youtube, where I jumbled around a bit on my Heritage, where you can primarily hear the purely acoustic sound. There is better not a direct link to it here, because I strum covered things there. But you can find it quickly if you search for guitartestdiet and Heritage Eagle on Youtube. 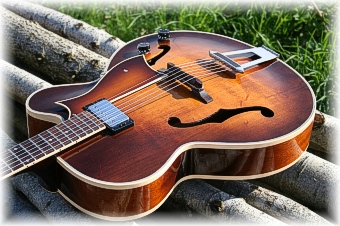 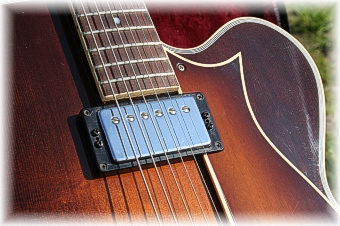 Like the Gibson L5, the Heritage Eagle has a 65 cm scale length. With the wound up .012 to .054 inch string set, the guitar is very playable. For a player like me who is used to Les Paul Mensur it takes some getting used to. The style of play also changes automatically, so to speak. The otherwise problem-free whole-tone bendings are suddenly no longer so popular.

When played without amplification, the guitar is a bit quieter than a dreadnought acoustic guitar and the sound is significantly different. It sounds by no means as "nice" wide and hi-fi-like as a good steel-string acoustic guitar.
Here it creaks a lot in the box and the sound has a more central, but strangely enough, much woodier character. Perhaps you could say it sounds like a dreadnought inhaling two boxes of Marlboro a day and spilling some Jack Daniels around in the lower case. At least that's how mine sounds, and that suits me very well, because it continues in electrical operation.

The guitar also has a remarkable amount of bass with thicker strings. Acoustically that's good, easily electrifying too much. My little Roland Mini Cube is quickly hopelessly overwhelmed and vibrates itself from the table, coughing from all cracks. Any full-blown clean amplifier with bass control gets along very well with the stout lady.

Naturally, feedback is quickly an issue due to the design. You just have to adjust the position to the amplifier and also manage the gain. That's the way it is with an archtop.

As already said, the beautiful smoky, creaky character is also retained in electrical operation. It's not versatile, it just has this tone. It sounds very woody and jazzy, but by no means dull. Fortunately, there are enough reserves of brilliance in addition to the abundant lower registers. To get a duller, more obscured jazz tone (raunchy is what you call it, I think I've read) you have to turn the tone potentiometer. The humbucker transfers the very special acoustic character of the guitar into the electrical world in my ears quite well. I know that Heritage built Schaller pickups in the nineties, so I suspect that I'm dealing with one here. Maybe I'll try another one at some point, who knows, but at the moment I don't feel like it at all.

You should stay at least halfway clean on the amplifier. This guitar is simply not made for distorted sound and it shows that. First of all, of course, through quick feedback, but then the sound is not really amusing either. The woody thing disappears and it becomes fat and boomy. The guitar literally resists it. You don't stay there long, that's nothing. The further you turn back the degree of distortion, the more the sun rises. Other guitars are there for these things. 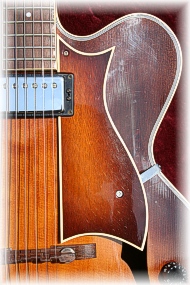 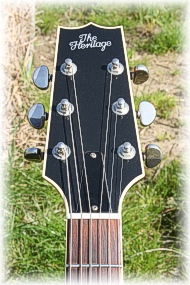 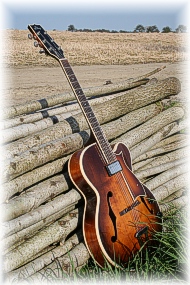 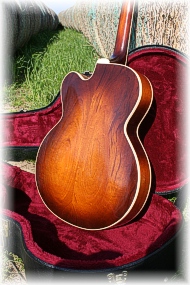 I bought my Heritage Eagle in the USA. With the individual humbucker, the choice of wood, the round (venetian) cutaway and the neck binding, it corresponded exactly to what I was looking for. So I took the risk. I spent a little less than 2000 euros including freight, it was worth it to me.

The workmanship of the guitar is first class apart from two small flaws. The string guide on the saddle was not 100% aligned, the A string had slipped a little away from the E string towards the D string.
The second small mistake was a 15th fret sticking out a little too high, which caused a buzzing when grasping the 14th fret. No big deal, just a case for the file. In any case, all of this contradicts the often heard statement that Heritage guitars are basically better processed than the Gibsons. In the meantime I have had a plek treatment on the guitar in Berlin, during which the saddle was also replaced. Now the playability is excellent and leaves nothing to be desired.
(If you want to know more about Plek, just google it)

The octave purity in connection with the wooden bridge is not one hundred percent, but in the not negatively conspicuous area. Good enough to get along without filing at the boardwalk. However, only with a wrapped G-string, because the existing wooden bridge is designed for this. A bare G-string that was pulled up on a trial basis and whose strength was appropriate threw the octave purity quite out of hand. The sound is also much more balanced in my ears with a wound G string.
When I changed the strings for the first time, I tried a Tuneomatic bridge made of metal, which fits easily onto the wooden bridge support. The octave purity could of course be set more precisely here, but the sound was a little less appealing for me. The woody sound was lost a little and with it a little bit of the character of the guitar. In the meantime, the boardwalk is back on and will probably stay that way.

Based on the label in the body, the seller suspected that it was the 58tieth Eagle built by Heritage, which is probably nonsense. Model 05B could also be read from the model 058 noted in the body. However, I read OSB for Old Style Sunburst, a color scheme that is also offered on the current Heritage website and that my guitar also has. The guitar had no signs of wear except for very light plectrum strips on the pickguard, and the frets were like new. Apparently the guitar has hardly been played or not played at all and I hope it will settle in really nicely over time. 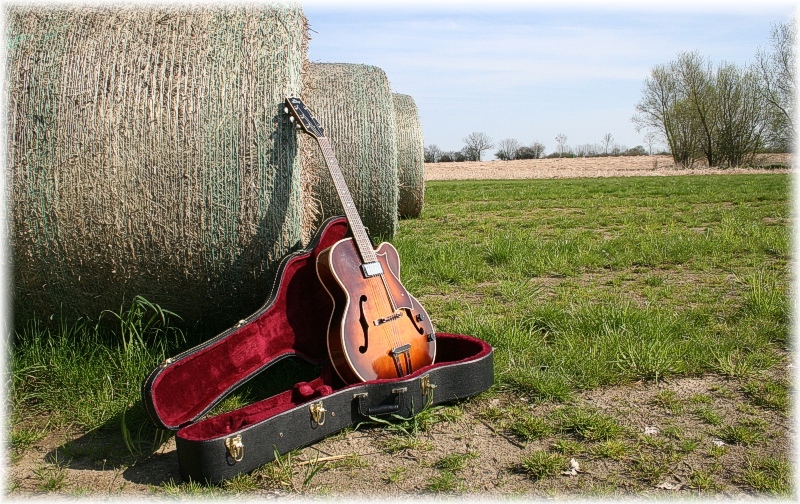