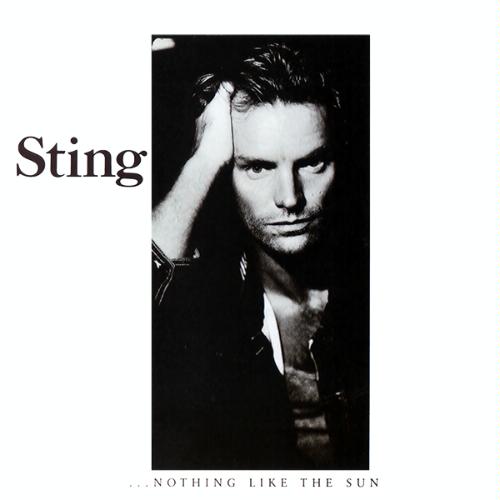 01. The Lazarus Heart * * * * *
=> The album begins with a very playful and multi-layered song - there is a lot to discover here for the close listener. The varied and sophisticated arrangement, the instrumentation, the production and the vocals make the song one of Sting's best non-single tracks for me. In my opinion, this song should have been released as a single. Clear 5 stars.

02.Be Still My Beating Heart * * * * *
=> The second heart title and the second 5-point rating. Again, a very sophisticated arrangement paired with a very special, depressing mood. For me, due to the atmosphere, it's even a little bit better than the other two 5's, and thus my favorite song on this album.

03. Englishman In New York * * * * *
=> Probably Sting's best-known solo title, although at the time it almost went down a bit in the charts - incomprehensible to me - (only the Ben Liebrand Mix a few years later came in at P20). The basis for this appealing, very round reggae / jazz mix is ​​the ingenious bassline. Great verses, strong chorus, very melodious: a true masterpiece.

04. History Will Teach Us Nothing * * * *
=> Certainly a bit weaker than the first 3 brilliant songs, but with a very useful bassline and cool groove. At first I had my finger partly on the skip button with this track, but it gets better the more you listen to it.

05. They Dance Alone (Gueca Solo) * * * *
=> A song to fall asleep ... but also somehow hopeful. Very solid track, which in my opinion - with a slightly different arrangement and different subject matter - would have had potential as a faster number. Sting received support from Mark Knopfler and Eric Clapton, who recorded both guitar parts. Unexpected samba rhythm change in the coda. Overall, a good track, but I'm missing something for a real cracker.

06. Fragile * * * 1/2
=> I always found it a bit unusual that the two quiet, quite similar titles were placed directly one after the other. I've never been able to do much with the Mediterranean-inspired fragile. Interesting in terms of content, but both melody and harmony don't necessarily appeal to me here.

07. We’ll Be Together * * * 1/2
=> For many the worst song on the album, and I can understand why: For me, the repetitive "Togeeether" of the background singers in particular turned out to be extremely annoying. The song is also rather spartan compared to other tracks on the album. However, I already see a certain potential in the song. You can't deny a certain degree of "funky" and especially towards the end it picks up speed again. I think we could have gotten even more out of this with a revision. In my opinion, the title was unsuitable as the opening single for the album - “Lazarus Heart” would have been my alternative or “Englishman” directly.

09. Rock Steady * * 1/2
=> Weakest song on the album. I really hate to listen to it because it leaves me emotionally almost completely cold and unaffected. Unfortunately, the title pulls the otherwise really good album down a bit.

10. Sister Moon * * * *
=> Its mood reminds a lot of “Moon Over Bourbon Street” from the previous album, but it's a bit slower and in my opinion a bit better.

11. Little Wing * * * *
=> A very successful cover version by Hendrix ‘Original with a soulful vocal performance by Sting. Both dealt with the loss of their mother in it. The band line-up was a bit different here than on the rest of the album (Mark Egan on bass, Hiran Bullock on guitar, etc.).

12. The Secret Marriage * * * 1/2
=> Extremely entertaining and difficult to master piano / vocal piece, the original from the pen of Hanns Eisler (who worked with Berthold Brecht for years) and conveys a very sad mood. Sting exchanged the lyrics from the original. Certainly a rather unusual but by no means a bad ending to this album.

Conclusion: Sting's first two solo albums are pretty close together. Compared to “Dream Of The Blue Turtles”, “… Nothing Like The Sun” has been produced a little better in terms of sound and in a certain way is certainly a little more demanding than the debut album. The start of this album with the first 3 songs is perfect, but I am still missing 1-2 really good tracks to be able to compete with the turtle album. Regarding the order, I would probably have placed some of the songs differently (eg "They Dance Alone" and "Fragile" not one after the other) and "We'll Be Together" would have either been reworked or completely blown off the album - not necessarily because it's the worst song, but because it doesn't quite fit in with the rest. Otherwise it's a really successful follow-up album.