Who is your least favorite film director?

Which of your films do you like most personally?
"My name is Nobody!" 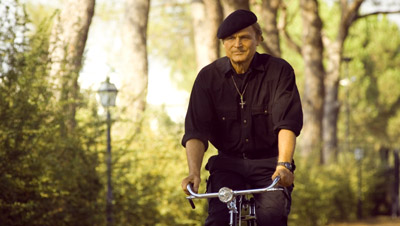 And which of your films do you like the least?
You may not know this movie, it's called 'Alone Against the Law'.

What was your greatest artistic challenge?
That is a difficult question. But I can say that I was very happy with the film 'My Name is Nobody' and with 'Don Matteo' too.

What do you like to do when you are not working?
What I do when I'm not working - I love the outdoors and like to ride my motorcycle, I like to read and listen to music, preferably classical music. And I like skiing, cross-country skiing.

Do you remember a scene that was difficult to film?
Difficult - no, because once you have shot a scene, it is no longer difficult. But I can remember eating a lot of beans in the movie The Devil's Right and Left Hand. Before this scene, I didn't eat anything for 24 hours.

Is there a location that you liked so much that you want to go back?
Yes, New Mexico. That's where I shot 'My Name is Nobody'. I went back there to film 'Lucky Luke' and I loved it so much I lived there for 9 years!

Who's your favourite actor?
A contemporary actor? I think Mel Gibson is good.

What was your experience in Hollywood? Are there any differences between filming in the US and Europe?
Shooting is actually the same. What comes to mind is 'March or die', that was a great film, colossal. I remember a journalist from Europe visiting me while I was shooting in Hollywood. He said, "It's so weird to get here. I had to pass at least ten or twenty trucks and walk at least a kilometer. And when I got here it was just like other locations: an actor and a camera! What's all this stuff doing here? " 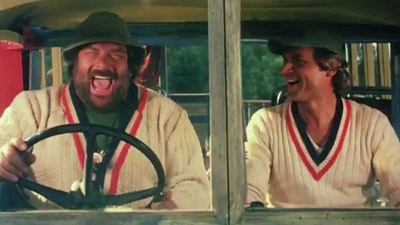 What can you tell us about your friendship with Bud?
We get along very well, but we don't see each other very often because we're busy on different locations. But we are on the phone. We're friends and we have things in common, we built our careers together and made a lot of films together. I can say he's like a brother to me. Even if we don't see each other for a while, he is always like a brother to me when we meet again.

Have you ever thought about quitting your career?
No. I don't want to do anything I don't like, and at some point I want to be a director.

Which of Bud's films do you like the most?
I think the 'Flatfoot' series. She was very good!
<?