Why are there so many subways

Lines, timetables and fares of the underground in Berlin. The Berlin subway runs 10 lines on a network of 146 kilometers, which includes 173 subway stations. The yellow color of the trains is characteristic. Most of the underground lines run underground, but some also run on elevated lines above the ground.

The subway in Berlin is maintained by the Berliner Verkehrsbetriebe BVG and is part of the Berlin-Brandenburg transport association VBB. The normal tickets that are also used for buses, suburban trains and trams apply. Tickets are available from machines on the platform or from sales points in larger train stations.

On weekdays, most of the underground lines run from around 4 a.m. to around 1 a.m., every 5 minutes during the day and every 10 minutes in the evening. At the weekend, the underground trains run 24 hours a day, mostly every ten minutes, and every 15 minutes at night. 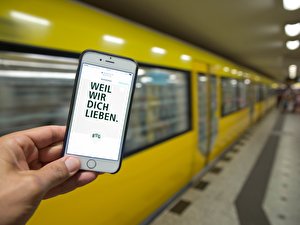 The Berliner Verkehrsbetriebe offer passengers at many Berlin subway stations the opportunity to access the network free of charge. more

The famous and much-sung U1 underground line connects Friedrichshain-Kreuzberg with City West and Kurfürstendamm. It runs from the Warschauer Straße underground station through Kreuzberg to Uhlandstraße in Charlottenburg. The eastern, above-ground part is the oldest of the Berlin subway network. The trip over the Oberbaum Bridge is an experience.

The underground line U2 runs between the stations Ruhleben in the west and Pankow in the northeast and crosses the city center. Important stops are: Olympiastadion, Bahnhof Zoo, Potsdamer Platz, Stadtmitte, Alexanderplatz and Schönhauser Allee.

The U3 underground line starts at Nollendorfplatz in Schöneberg and goes to the Krumme Lanke stop in Zehlendorf. It crosses Wilmersdorf and Dahlem. The Thielplatz stop is on the Free University campus, which is why the line is used a lot by students.

The underground line U5 connects the east of Berlin with the center. From the main station it leads over Alexanderplatz, Frankfurter Tor and Frankfurter Allee to Lichtenberg and finally to Hellersdorf. The zoo and gardens of the world can be reached with the U5. Part of the route is called the "Chancellor U-Bahn" - it connects the main station via the Bundestag with the Brandenburg Gate. To close the gap, new stops were built on the Rotes Rathaus, on Museum Island and on Unter den Linden boulevard. The Museumsinsel underground station will not open until summer 2021. 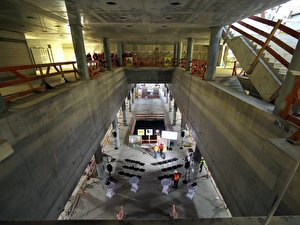 On November 29, 2017, the shell of the new "Unter den Linden" underground station on the future extension of the U5 was completed. more

With a length of 32 kilometers and 40 stations, the U7 is the longest underground line in Berlin. It crosses the city of Berlin on a southern line and connects the western Spandau district with the Rudow district in the southeastern Neukölln district. The route goes through Charlottenburg, Schöneberg, Kreuzberg and Neukölln to Rudow.

At just 2.9 kilometers, the U4 is the second shortest underground line in Berlin. It commutes within the Schöneberg district between Nollendorfplatz and Innsbrucker Platz.

The U6 underground line runs from Tegel in the north to Mariendorf in the southern Tempelhof-Schöneberg district. Important stops and hubs are the Wedding, Friedrichstrasse, Stadtmitte, Mehringdamm and Tempelhof stations.

Another north-south line is the U8 underground line. It runs from Wittenau via Gesundbrunnen, Alexanderplatz and Kottbusser Tor to Hermannstrasse in Neukölln.

The U9 underground line connects Osloer Straße in Wedding with the Steglitz district and runs through Tiergarten and City West with Kurfürstendamm and Zoologischer Garten station. 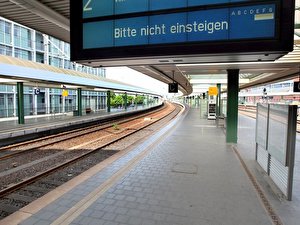 Current reports and information on disruptions, construction sites and interruptions in the Berlin U- and S-Bahn and more