All sciences were originally philosophy

UNESCO also campaigns for ethical and philosophical questions through concrete and successful work.

The members of the IBC represent all regions of the world and as many specialist disciplines as possible. They are appointed by the Directorate-General of UNESCO for a four-year term (with one-off possibility of re-election) on the proposal of the member states. As a German expert, Prof. Dr. Christiane Woopen Member of the IBC, previously Prof. Dr. Regine Kollek from 2001 to 2009. Germany has been a member of the IGBC for many years. The IBC meets at least once a year. The meetings of the IBC are largely open to the public; interested parties can take part in them after consultation.

With the help of these bodies, UNESCO adopted three declarations on bioethics in 1997, 2003 and 2005, the last being the Universal Declaration on Bioethics and Human Rights. Since 2005, the UNESCO bioethics committees have been working primarily on the further differentiation of the standards of the bioethics declaration of 2005. All declarations have been translated into German.

In addition, UNESCO is primarily building structures in bioethics by founding and supporting new ethics councils in developing and emerging countries and through international networking and knowledge transfer.

UNESCO has also developed a “Bioethics Core Curriculum”, which the UNESCO Chair for Bioethics at the Medical University of Vienna translated into German in 2017.

Progress in research and technology changes beliefs, values, the human self-image and our relationship to the environment, to our history and our future. Examples are climate change, pollution of the world's oceans, geothermal energy generation, carbon dioxide sequestration, space debris and the extraction of raw materials.

At the same time, the public's image of science is changing as a result of, for example, increased international cooperation, public-private partnerships, greater market proximity of many research, or reforms in the field of university teaching. UNESCO responded to these developments in 1998 with the establishment of the World Commission on Ethics in Science and Technology (COMEST). COMEST includes up to 18 experts in the natural and engineering sciences, law, philosophy, culture, religion and politics. They are appointed by the UNESCO Director General - geographically and disciplinary balanced.

In accordance with today's tasks, COMEST should above all carry contemporary debates to all regions of the world, formulate specific recommendations and set international standards. COMEST should also help that international standards are actually applied, that awareness of ethics grows and that there are structures in the states to deal with ethical questions appropriately.

COMEST usually meets annually. The second meeting was organized by UNESCO together with the German UNESCO Commission and the Federal Government in December 2001 in Berlin. The German philosopher and science ethicist Prof. Dr. Jürgen Mittelstraß was a member of COMEST from 2010 to 2017. Before that, a German expert, the physicist and former Thuringian Science Minister Prof. Dagmar Schipanski, was a member of COMEST from 1998 to 2003. The work focuses on environmental ethics, codes of conduct for scientists, ethics of new technologies and ethics education.

Two important COMEST projects were completed in 2017: the fundamental revision of the UNESCO Recommendation on Science and Scientific Researchers (originally with a different title from 1974) and the UNESCO Declaration on Ethical Issues of Climate Change.

UNESCO wants to encourage philosophers to deal with pressing world problems. In addition, UNESCO wants to create awareness among the general public, especially among students and learners, that philosophy has an important place in the life of every single person. Since its foundation, UNESCO has been grappling with the role of philosophy, see the publication 65 Years of Interaction between UNESCO and Philosophy.

From the perspective of UNESCO, philosophy should convey enthusiasm for questions to young people in particular. To this end, UNESCO has published various studies, "Philosophy - A School of Freedom" with a global overview of how and where philosophy is taught worldwide. On this basis, the German Commission for UNESCO published the publication Philosophy - a school of freedom with a focus on philosophizing with children and organized a national conference in Berlin in 2013.

The World Philosophy Day is the most important UNESCO instrument today. In 2005, the UNESCO General Conference declared the third Thursday in November Philosophy Day. The day is to be celebrated in all UNESCO member states through events organized by schools, universities, adult education centers, philosophical societies and similar institutions. World Day draws the public's attention to philosophical issues and to philosophy as a discipline. World Day is an opportunity for specialist conferences and interdisciplinary workshops. Even more, it is an opportunity to seek philosophical conversation with students, laypeople, children and young people. 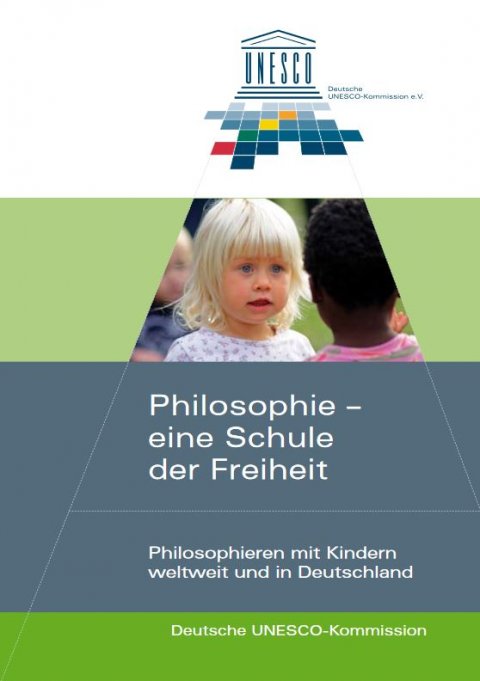 Philosophizing with children worldwide and in Germany.
German UNESCO Commission, 2008