Why did Lakshman die before Ram

recorded by her namesake Urmila Goel

Namaste! Mera nam Urmila grove. My name is Urmila. Today is Diwali. Today in my hometown and in many other Indian cities they celebrate the return of my brother-in-law Rama to Ayodhya. But I don't feel like partying at all. Let me tell my story. Then maybe you can understand that.

Have you heard of Urmila before? No, I don't mean the film actress! So not? That does not surprise me. Not much is said about me. My sister-in-law Sita is on everyone's lips and of course her husband Rama. And from time to time his brother, my husband Lakshman, is also mentioned. But only as his brother, not as my husband. What does all of this have to do with Diwali? Let me tell you: 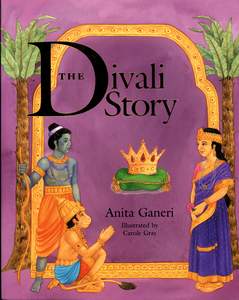 I start at the very beginning so that you know what it is about. So it all started when my father King Janaka found a girl. He found them in the ground when he was preparing a sacrifice. And because of this unusual place and circumstance, he called her Sita and adopted her as a daughter. She was something very special and so my father determined that only a prince who showed strength could take her as his wife.

A bow then played a role in proving its strength, but if I also told its story, that would clearly go too far and I would never get to Diwali, because a lot will happen until then.

Anyway, Rama came, drew the bow and got my sister Sita as his wife. And since my father was already in the process of marrying off his daughters, he also promised me Rama's brother Lakshman. I don't remember being asked, but it wasn't that common either. The very next day - if I remember correctly - the four-way wedding was celebrated. Yes, you heard that right Quadruple! My two cousins ​​were also married off to Rama's other brothers. So we became part of the royal family in Ayodhya and I was even mentioned in the great epic Ramayana.

We were just about to settle down in Ayodhya when an evil woman succeeded - it's always the women to blame! - to prevent Rama's consecration as king. Instead, his father sent him into exile for 14 years. If you want to know the details, you should look into the Ramayana. It tells how Rama's stepmother is persuaded by the wicked woman to take the king's promise to crown her son and to send Rama into exile. I am telling you what is not in the epic or what is not further elaborated there.

Well, my sister Sita - emotional as she is - didn't want to be separated from her husband so soon after the wedding and begged him to come along. And of course, as young men are like that, he couldn't resist women. She was allowed to move into the forest with him in a very romantic way. My husband didn't want to stand in line either and started: No, he couldn't let his brother go alone. - He wasn't alone at all. Sita was by his side. But women probably don't matter to Lakshman. But that is another issue.

So back to the story: my husband announced that he and Rama were like the Ashvins - you know the twin sons of the sun, the heralds of dawn and so on - so like the two they too are inseparable. Rama liked to hear that, of course, and so Lakshman was also allowed to join.

Again nobody asked me. But I wasn't even asked at the wedding. And actually I didn't really know Lakshman when he moved into the forest with the other two. In the meantime, I had to see where I was staying, or rather, what I would do alone in Ayodhya.

My husband Lakshman followed Rama and Sita, built them a hut, hunted for them, in short did everything his brother wanted him to do. - Maybe it wasn't so bad that he wasn't with me. - And Sita was pretty and loyal and such. And Rama strong and so on. And above all stubborn. His brother Bharata, who was to be ordained king in his place, begged him to come back, and so did everyone else. But Rama remained steadfast. He was banned for 14 years and it should stay that way. The consequences of his steadfastness then had to be washed out by everyone else. Not just Sita and Lakshman. Also poor Bharata, who had to become king against his wishes. My father-in-law, the old king died of grief. I might have done it best because I could do what I wanted. Well, within narrow limits, of course. I was a wife, so I could only move around with women. I didn't look at a man. But that wasn't too bad either.

Well, and the story of the exile continued. After all, 14 years is a long time. Sita was kidnapped. Rama and Lakshman were looking for them. They also got help with that. Especially from Hanuman - you know the Monkey King, don't you? My family still adores him today. I could tell you more, but that distracts from the actual story.

So while I was kept in Ayodhya, so to speak, leading the fate of a woman, the two brothers wandered all over India and then even crossed the sea to Lanka - the island was later called Ceylon by the British and is now called Sri Lanka. The two went to Lanka, because that is where the evil Ravana had kidnapped the beautiful Sita. It then went on with all sorts of battles. In between, however, Rama and Lakshman saw that they had landed on a very nice piece of earth. I didn't get there until much later. It's really beautiful there. In Kandy I was in a wonderful guest house. But I'm getting off the topic again.

So back to the Ramayana. I'll just give you the quick summary here. So it went wild back and forth. It looked as though both Sita and I were going to be widows. And that would certainly not have been a nice end. We would only have been allowed to wear white, our social life would have come to an end. But as it is with fairy tales, excuse me with great epics, in the end, of course, the good wins. And the good thing is of course brother-in-law Rama. Which, by the way, has nothing to do with margarine. The A at the end of a word is actually not pronounced and so Ram and Rama are the same. So he then frees Hanuman and my husband Sita with active support. Then what does he do?

No, he doesn't take his long-missed wife in his arms, he hugs and kisses her. Of course, that is not appropriate in public. But he doesn't even have to back off. Because since she lived with another man - even if it was involuntary - and since she is pretty, she must have dishonored him. So he disregards them. He did not set her free for her sake, but to save his honor. But my dear sister Sita - she is so good and loyal! - had successfully fought against Ravana the whole time and was actually quite innocent. But it was not enough for her to assert it. No, she had to go through the fire first to prove her innocence. If you don't want to read that directly in the Ramayana, you can also watch the film Fire, all of which occurs there. 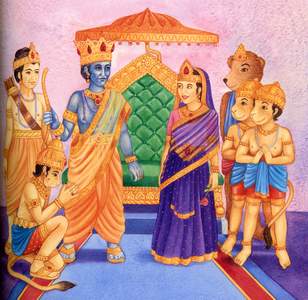 So after Sita had successfully proven her innocence, Rama took her back and then they went back to Ayodhya with Lakshman. Here everyone was very happy and happy that the shining hero Rama was back. And I was remembered too. No, it wasn't Lakshman who remembered me and rushed to me. He was still very busy helping his brother Rama. First, of course, is the brother. But Sita was there again and so we sisters were called to decorate her for her husband's coronation. I can't do that much with all the jewels and things like that, but I was looking forward to seeing my sister again. We are very different, she is too good for me and too devoted to her husband, but she is my sister and I love her. In this respect, Rama's return to Ayodhya - and that is celebrated on Diwali - is of course also a happy day for me.

The only stupid thing for me was that Lakshman was coming back too. My husband. We had only seen each other for a few days and that was 14 years ago. What should I do with him now? For the first time since he left there was a man in the house. - Really! What should I have done with men in the meantime? The company of women was enough for me. And Lakshman didn't question that any further, I didn't have to go through a trial by fire to prove my innocence. She wouldn't have been a problem. Like Radha - in the movie Fire, Radha does the ordeal by fire and not her sister-in-law Sita, but that's a completely different story - like Radha, I would have passed it. But still it doesn't have to be to go into the fire. I don't find the idea so pleasant in itself.

But whether I want to celebrate or not doesn't matter. I'm just a woman after all. And I would take a ladhu too. Do you have another one for me?