How do you develop emotional boundaries

Emotional development right from the start -

Three o'clock in the morning - a baby wakes up and starts crying.
His mother comes in and gives her child a drink. The baby sucks happily on the mother's breast, who looks at the child lovingly and caresses it. Safe in the mother's arms and fed up, the child falls asleep again. 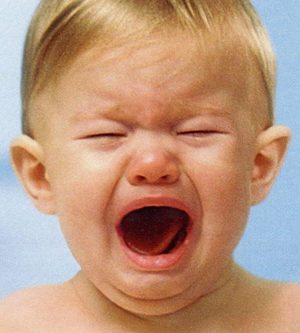 Three o'clock in the morning - a baby wakes up and starts crying.
His mother is nervous and irritable because she fell asleep only an hour ago after an argument with her husband. The child tenses up immediately when the mother abruptly picks it up. While the child is drinking, the mother stares as if petrified without paying any attention to her child and becomes more and more excited because she has to think of the argument from earlier. The child feels this tension, squirms, stiffens and stops sucking. The mother then abruptly puts the child back in its cot and lets it scream until it falls asleep, exhausted.

These two interactions show what different experiences children can have in dealing with their feelings at a very early age (Goleman, 2002). While the first child learns that his needs and expressions of feeling are taken seriously and reliably satisfied by the mother, the second child is taught that his or her emotional expression is hardly or only negligibly observed by the mother. With regard to the child's emotional development, these everyday interactions between parents and children, repeated over many years, shape the child's inner image of how much he can rely on emotional relationships and the consequences of openly expressing his feelings.

Emotional learning begins in the first moments of life and continues throughout childhood. The clearest steps in emotional development take place in the first six years of life and include the following skill areas, which develop parallel to one another and influence one another:

If one looks at the development of the expression of emotions, the non-verbal expression of basic emotions such as joy, sadness, anger and fear can first be observed in the course of development. At the same time, in the first two years of life, the child learns to recognize emotional and emotionally relevant expressions of the caregiver (e.g. the encouraging voice of the mother) and to react to them (e.g. by smiling). In situations in which the child is on his own, he learns regulation strategies and behaviors right from the start, with which he can calm himself down in stressful situations (e.g. by sucking his thumb or with the help of the cuddly toy).

Linguistic expressions of feeling develop from the age of two and expand the child's repertoire of emotional communication as well as the child's learning and interaction opportunities. Talking about feelings becomes more important with age, although non-verbal expression of emotion does not lose its importance in understanding emotions. By verbalizing emotional experience, the child develops so-called “emotional schemata” based on concrete situations (Ulich, Kienbaum & Volland, 1999), i. H. a steadily growing repertoire of “general knowledge” about typical triggers of certain emotions, which it can apply in new situations. In this way, the child acquires the ability to foresee emotional situations and reactions in themselves and in others and to act accordingly (e.g. avoid unpleasant emotional situations).

In preschool age, the child increasingly learns complex emotions, such as B. Knowing pride, shame, guilt or envy - self-related and social emotions, which require certain cognitive developmental steps and a differentiated understanding of emotions. The development becomes clear in the following step model (Wertfein, 2006):

As soon as children recognize which feelings are triggered in themselves in which situations, they gradually develop an understanding of the emotions of others. Prerequisites for the development of empathy, i.e. the ability to perceive an emotional situation and to experience feelings on behalf of the person concerned (Friedlmeier, 1993) are primarily cognitive factors, such as the knowledge that the observable expression of emotions and the actual emotional experience in social Contexts do not always have to match (Petermann & Wiedebusch, 2003; Saarni, 1999). The development of empathy goes hand in hand with the development of prosocial behaviors and can be described as a process from a self-related perspective in the first year of life, when children are not yet able to differentiate between their own feelings and those of others, to context-related empathy in late childhood, which Enables children to take general living conditions into account in their prosocial behavior (Hoffman, 2000) (see also Table 1).

Table 1: Overview of the development of empathy and prosocial behavior

The ability to empathize is closely related to the knowledge of so-called "social performance rules", i.e. the knowledge that one can or should hide one's actual feelings in certain social situations. A well-known presentation rule can be illustrated using a thought experiment.

Imagine receiving a lovingly wrapped birthday present from your mother-in-law. Excited and full of anticipation, you unpack it under the expectant gaze of your whole family. - But what a disappointment! You wished for a lamp, but it looks used and doesn't suit your taste at all. How do you react?

Most people would probably be happy to say thank you in this situation and not show their disappointment. Why actually? If you ask school children why they sometimes fake or hide feelings, they give the following reasons (von Salisch, 2000; Wertfein, 2006):

It is astonishing that three-year-olds already have the ability to willingly control their facial expression and hide their actual feelings from others (Petermann & Wiedebusch, 2003; Banerjee, 1997).

While the knowledge of social rules for the expression of emotions represents the outwardly directed form of emotion regulation, children in emotional situations acquire an inner way of dealing with their feelings from the beginning, the so-called internal emotion regulation. In stressful situations, it can be observed that infants and toddlers regulate their emotions interactively, i.e. with the support of their caregivers. With increasing age the children learn that they can avoid unpleasant situations and feelings (e.g. frustration caused by an inaccessible object) by deliberately diverting their attention or withdrawing. In addition, children experience the effect of self-calming strategies, for example through physical calming (rocking, sucking), in preschool age through calming behavioral rituals (e.g. deep breaths) or self-talk. Finally, children from preschool age also use cognitive strategies, such as mental distraction or reinterpretation of emotion-triggering situations (Petermann & Wiedebusch, 2003).

On the one hand, the various areas of emotional development are related to other areas of development, especially cognitive, linguistic and social development. On the other hand, genetically determined differences in temperament (especially the emotionality of the child) as well as diverse socialization conditions (e.g. family environment, experiences with peers, school influences) play a decisive role in the question: How do children learn to deal with emotions? The following figure illustrates the interactions between these factors in emotional development. 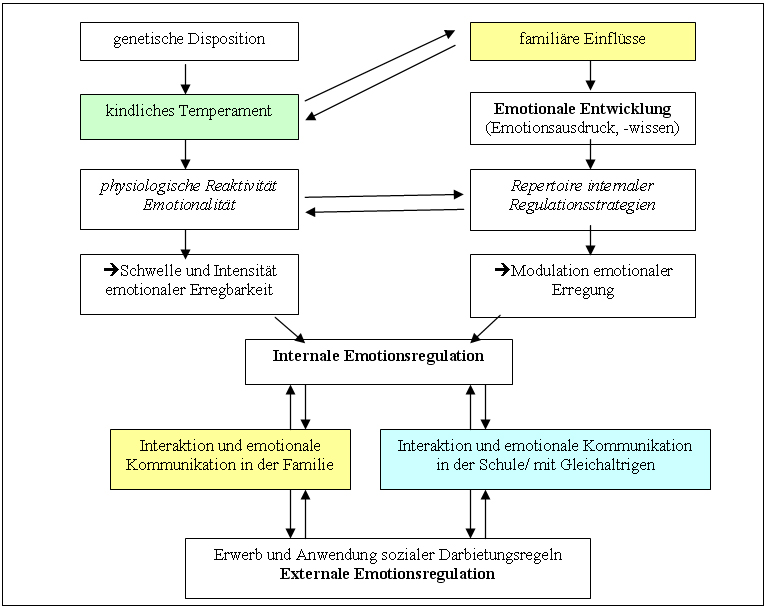 The graph shows that the ability to regulate emotions is closely related to social relationships outside and within the family. Especially with regard to unpleasant feelings such as anger, sadness and disappointment, the repertoire of regulation strategies is an important resource in dealing with stressful situations and conflicts. Children who cannot focus their attention or who often react with anger and suspicion,

Children who, on the other hand, use constructive coping strategies, can flexibly adapt their behavior to new situations and express few negative emotions due to good emotion regulation and low excitability are more popular with their peers and are also considered more prosocial, cooperative and socially competent by teachers and parents (cf.Wertfein , 2006). These relationships between emotional and social skills remain largely stable between the ages of six and twelve (Murphy et al., 2004) and can also have an impact on school success (cf. Petermann & Wiedebusch, 2003).

Dr. Monika Wertfein is a qualified psychologist and research assistant at the State Institute for Early Childhood Education

Here you can find part 2 of the series: How can parents promote the competent handling of emotions?

Here you will find part 3 of the series: How can educational professionals promote the competent handling of emotions?