How does Quora motivate volunteers

As a German guerrilla in the Yugoslav wars

"To be able to call myself a soldier, I thought, I had to fight. Otherwise I could have joined a paintball club." Roland Bartetzko describes his motivation so simply, why he left the newly unified Germany in the early 1990s to go to the Bosnian war. His book "The Smell of War - Lessons from Battle" is now also available in German. 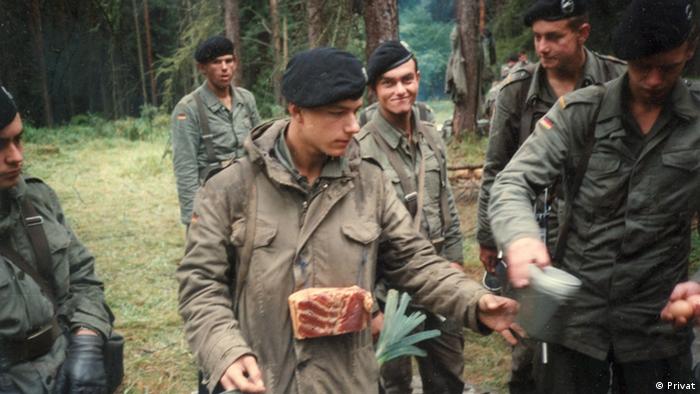 Roland Bartetzko when he was still a soldier in the Bundeswehr

Bartetzko now lives in the Kosovar capital Pristina. Born in 1970 in Würselen in the extreme west of Germany, he served in the German Armed Forces as a teenager. His logic that a soldier can only be called whoever is fighting irritates and makes one sit up and take notice.

The answer to a small question from the Left Party in the Bundestag in 2001 shows that "R.B." was dismissed under Section 55 (5) of the Soldiers Act. Only those Bundeswehr soldiers are put in front of the barracks door if they "culpably violate" their duty to serve or whose continued whereabouts "would seriously endanger the military order or the reputation of the Bundeswehr". But Bartetzko doesn't want to know anything about that.

The request from the left in the German Bundestag also revealed other things: that around 100 Germans fought on the Croatian side - mostly right-wing extremists. Bartetzko a Nazi? Not at all, he replies. He calls them abhorrent. "For me it was just a thirst for adventure. The others may have had problems - with the police, the wife or the family. There were also war tourists who thought it was cool to spend a week at the front."

In retrospect, it is very problematic to research the reasons. "You are already dishonest and say that you only fought for the freedom of Croatia or Kosovo. That is of course nonsense," he says in an interview with DW about why he joined the Croatian Defense Council (HVO) in Bosnia and later also joined the Kosovar Liberation Army (KLA). 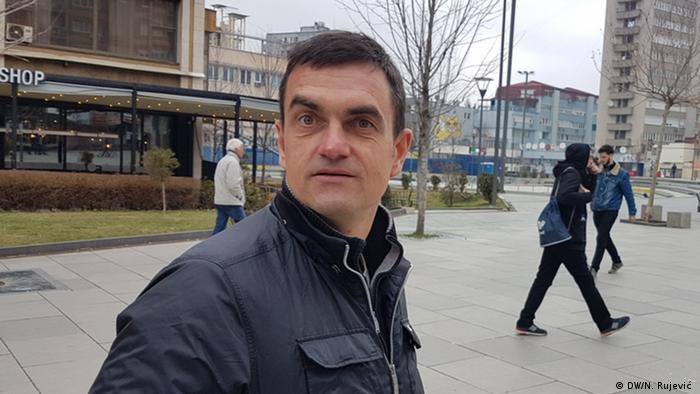 Fought for the Kosovar KLA and now lives in Pristina

Bartetzko seems to be driven by describing everyday life as a soldier. For years he has served Quora, a world-famous forum that distributed some of his posts to an audience of millions. He describes how to keep your buttocks and teeth clean in war when the water is scarce, why cigarettes can be a coveted means of payment or how a deadly ambush is laid. Or how to deal with your fear without going crazy.

"The next morning I slowly woke up, no one was shooting, the sun was shining in the basement from outside, and I thought to myself: 'What a beautiful morning!' But slowly it occurred to me where I was and my next thought was: 'Shit!' "

Anyone expecting a structured experience report will be disappointed after reading 172 pages. His book is more of a collection of anecdotal episodes. Bartetzko also tries his hand at guerrilla tactics as a tipster, or acts as an amateur psychologist and motivational coach. "There is so much crap being told. The book is meant to fight this turbopatriotic mythization."

Croatia and later Kosovo ultimately achieved their main goal: the detachment of their territories from Yugoslavia. In both countries the wars are interpreted as a defensive struggle against the "Serbian aggressor".

Isn't a foreign volunteer, who also reports on the taboo subject of the traumatization of soldiers or the consumption of alcohol and drugs at the front, perceived as polluting the nest? "As soldiers, we didn't necessarily think about having to liberate the country every day. That is not the everyday life of the soldiers."

The second life in Kosovo

Unfortunately, Bartetzko hides some things in his little book, although his personal experience could have been valuable. The brutal wars in the crumbling Yugoslavia in the first half of the 1990s killed more than 130,000 people and around two million lost their homes. But while the former fighter describes the crimes committed by Serbs in detail, there is nothing to be read about the Croatian or Kosovar human rights crimes. "I haven't seen any crimes, which doesn't mean there haven't been any," Bartetzko told DW. "If you come as a foreigner, you won't be told such things either."

But he has a number in his head how many people were killed by his Kalashnikovs. Or how many were killed by the mines he laid. However, he does not mention the number. "I didn't look to see if they were actually dead."

The book ends with the NATO bombing and surrender of Serbia in June 1999. Almost two years before Roland Bartetzko's life took a decisive turn. On April 18, 2001, a car belonging to the Yugoslav consulate in Pristina was blown up. A colonel in the Yugoslav police died and four other people were injured. A little later, the "deserved" KLA fighter Roland Bartetzko was arrested. 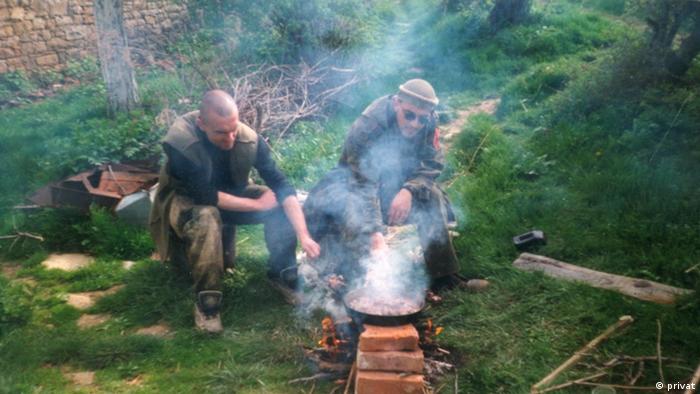 Bartetzko as a photographer: two KLA fighters during the 1999 war

As in court, Bartetzko denied his guilt to the press. He senses a conspiracy by the UN mission in Kosovo, which continues to control the judiciary in the protectorate, behind the allegations against him. He did not have to serve the 20-year prison sentence to the end - he has been paroled since 2015. He used the time behind bars to complete a law degree. His wife, a Kosovar Albanian, was patient enough to wait for him. That is why he lives in Pristina, speaks fluent Albanian and is well connected.

Some of his war friends - and enemies - have become War Dogs. This is the name given to those who know nothing but war and don't want anything else. You travel the world as legionnaires. They occasionally appear in the media when there are reports of foreign legionnaires in Croatia, Serbian mercenaries in Donbas or Albanians who have become jichadists. Bartetzko is at home in Pristina and is very satisfied as a lawyer in a company that produces television series.

Isn't it a bit like a paintball club? "Nope, I'm too old for war. This is a closed chapter."