Cookbook by Tessa Kiros: From Provence to Pondicherry ★★★★★

Masala and mussels, chilli and cider - everything comes together at Tessa Kiros. She traveled around the world in the footsteps of the French colonial past and collected recipes. The result: a very unusual cookbook.

... and I'm looking forward to seeing Tessa Kiros again: her “World in My Kitchen” was my first “beautiful” cookbook at the time and still has a place of honor on my bookshelf today. In the meantime, my enthusiasm for her books has gotten a little old and needs a breath of fresh air.

"From Provence to Pondicherry" is now her tenth book. The idea: a journey of discovery in the footsteps of French cuisine. From Provence she travels to Guadeloupe in the Caribbean, on to Vietnam, then to La Réunion in the Indian Ocean, then to Pondicherry - or Puducherry, as the city is officially called today - in southern India on the Bay of Bengal and back to Normandy; a chapter is dedicated to each of the six stations. 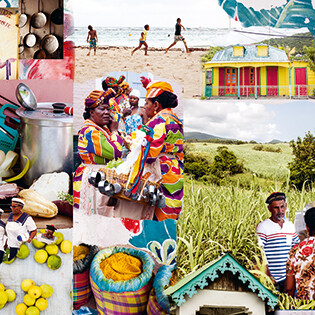 The stations overseas give an idea of ​​culinary parallels - despite all the diversity: four tropical islands or coastal regions shaped by the sea, linked by the French colonial past; Réunion and Guadeloupe are still politically part of the European Union as French overseas departments.

Anyone who knows Tessa Kiros ’books also knows her weakness for stylish, sometimes quite opulent productions. She stayed true to this style here as well. At first glance, the inconspicuous pink-gray cover in the style of an antiquarian travel notebook hardly gives any idea of ​​how splendid it is inside. The atmospheric photos of the country and its people, the detailed recipe photos, perfectly and imperfectly arranged down to the last blob and crumb, appear very up-to-date, framed and underlaid with fine drawings, map details and other small graphic elements, which in turn take up the style of the travel directory - that Book is really a feast for the eyes.

The recipes are also colorful: from simple to refined, from street food to classy, ​​there is something of everything. There are simple dal and elaborate curries, grilled quail and mango chicken, bouillabaisse and sweet potato cakes, tapenades, chutneys and seasoning mixes, gratinated seafood, flambéed lobster and fried cod fritters, iced coconut coffee and flavored rum, and everywhere a lot of fish and seafood, lots of fruit and fresh.

More from Tessa Kiros at Valentinas

My eye wants to cook EVERYTHING, but the exotic recipes set my limits; in particular, some of the fresh fruits and vegetables and fish and seafood are not available or are not available on acceptable terms. After all, the ingredient filter lets more than enough pass through, and I'm particularly curious about the many mussel recipes. Last summer, we collected mussels ourselves a few times and, as a precaution, combined them with delicate aromas in a classic way so as not to let the inherent taste get lost - far from it, they can hold their own surprisingly well against stronger flavors! But the other test candidates have all proven to be delicious and refined; only the Provencal Pissaladière was not overly enthusiastic, but Tessa Kiros could not be blamed for that.

But what is the "French" thing about the recipes? With a Vietnamese baguette, a papaya gratin with bechamel sauce or a coconut tart, the French heritage is obvious, but with many recipes I need a lot more imagination, and sometimes I really don't have any clues. It is probably more the tropical-maritime travel route that, despite the large spatial and cultural distances, ensures a harmonious culinary tone and perhaps even connects the stations more than the common French heritage. But what can definitely be stated: It fits!

Successful revitalization! There are literally worlds between the travel stops, but Tessa Kiros has turned it into a coherent and extremely delicious cookbook. Outwardly a decorative feast for the eyes, which arouses wanderlust when leafing through it for the first time, it also proves itself in the practical test as an interesting, diverse and perfectly usable recipe collection, plus some highlights for special occasions. The recipes are sure to succeed, even if with the many exotic ingredients and spice mixes they cannot always be made as straightforward as we knew it from Tessa Kiros ’books. Overall an enrichment!