What are modern traffic signs made of?

How is a coat of arms designed?

If you don't have an old coat of arms, you have to design a new one. There are various points of reference for the symbols, which must be checked in the following order and used as a suggestion.

Regardless of which symbol is used, the simplicity of the representation is important in terms of good recognizability. In the case of larger objects or buildings, a particularly characteristic detail can also stand for the whole (e.g. a single wheel for the whole chariot, a water wheel for a water mill, a sword for a whole knight, ...). The type of representation has changed artistically over the centuries, but the heraldic description, also known as "blazon", always remains the same. The same blazon applies to all of the coats of arms of the Kingdom of Bohemia shown below:

Representations of the coat of arms of the Kingdom of Bohemia through the ages:

This is probably the most beautiful and most logical way to find a symbol. Does the family name or at least part of the name refer to a real object or a real living being (e.g. Baum, Eichler, Lindemann, sword, rabbit, Rehfeld ...), a profession or an activity (e.g. blacksmith, wheelwright, carpenter, armorer, ...) back, it makes sense to depict this in the sign. Here, of course, you have to make sure that the coat of arms does not already exist. It is completely irrelevant how the "tree" looks, for example. From a heraldic point of view, one lion is exactly like the other (see the lion in the coat of arms of the Kgr.Böhmen), as long as it is not shown e.g. in a different color or a different posture (see the Bohemian lion with those in the city arms of Flensburg, below). A representation can also be suitable for several names that represent, for example, various closely related professions or sub-professions.

Examples of talking coats of arms: 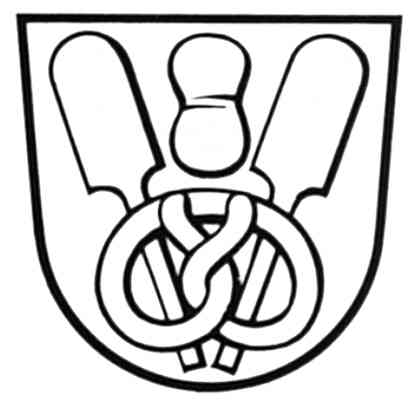 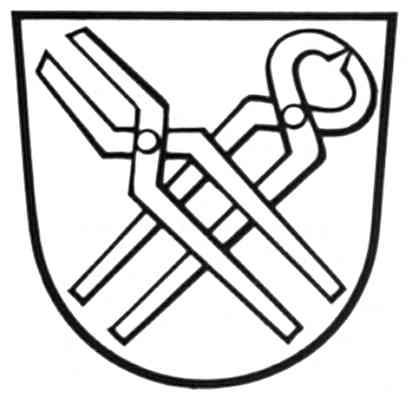 If the actual name does not provide much for an implementation in a picture (e.g. Petersen, ...), then the next look applies to any existing family traditions. If, for example, the same profession is practiced over generations or is at least very widespread in the family, then a symbolism can be chosen, as with names from the category of "talking coats of arms" The same applies to other traditions that can be represented graphically (e.g. special features of the living environment such as owning a mill, a tower, a house on a Hallig, a special landmark, ...).

If a family has lived in a place for a long time, the corresponding local or municipal coat of arms can also be used in the family coat of arms. It got to but then be modified in such a way that confusion is ruled out (e.g. changed colors and / or integration of another "family symbol")

This form of finding symbols can certainly be chosen if, for example, an outstanding event has come down to us in the family history. This form was used relatively often in the award of coats of arms in the Middle Ages. It is not uncommon for non-noble warriors to be knighted by their prince or king for special achievements after a battle and reference to the achievement could be made when the coat of arms was awarded at the same time. (Fictional situation: An archer decides the battle by hitting the enemy king. In his coat of arms, for example, a drawn bow could be depicted or a king's head pierced by an arrow.)

If you have not found what you are looking for in the first headings, hobbies, interests or even preferences can provide inspiration for the symbolism of the coat of arms. You should consider carefully whether you design the coat of arms only for yourself or for future generations.

The representation of a full coat of arms has changed in proportions over the centuries. While in the early Gothic period (12th / 13th century) a size ratio of "shield to helmet to helmet ornament" of "2 to 1 to 1" was common (as in the illustration above with the rose in the shield) and the helmet cover was slightly larger when the helmet was there, the proportions of "3 to 2 to 3" that are common for today's newly designed coat of arms emerged over many intermediate stages. The helmet cover has become a very large and ornamental element.

Here schematic drafts in this relationship in front and side representation.

In addition to the representation of simple objects on a simple shield background (e.g. the red rose on a silver shield, see above), the geometric division of the shield surface is one of the oldest forms of shield design. 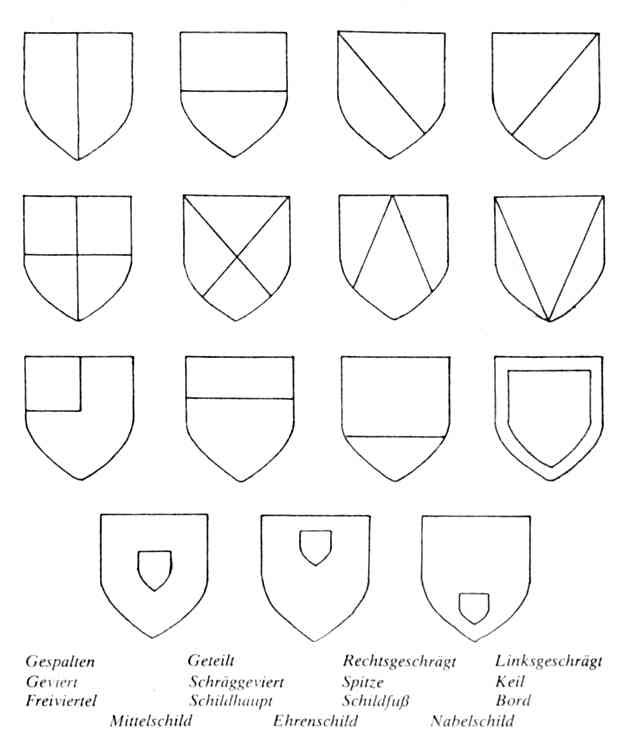 The descriptions like "left", "right", "left angled" or "right angled" always refer to the point of view of the knight who carries the shield! 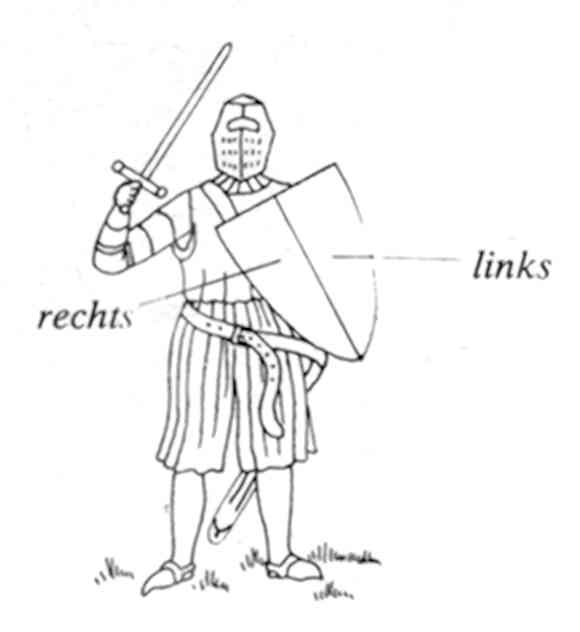 In addition to the simple divisions in the picture above, there is also the common version of a division by a "colored strip". This is called differently depending on its location:

More versions of shield divisions, in particular with different edge shapes of the dividing lines (e.g. zigzag line) can be found in the specialist literature (see below).

The heraldic correct color design of coats of arms is one of the simplest and most difficult tasks at the same time. In classic color heraldry, there are only 2 metals (gold and silver = yellow and white) and 4 colors (red, blue, green and black). In each case, the clear, unbroken basic colors are meant. If the coat of arms is shown in black and white, the hatching shown above is used (sometimes letters or symbols are also found in old representations).

In addition, there is "skin color" for human body parts (hands, faces, ...), occasionally "purple" and occasionally "natural color" (e.g. brown for wooden parts or pink for a flamingo).

- A coat of arms must contain at least one color and one metal.

- Surfaces with paint and metal must always alternate.

The primary goal is the best possible recognizability. The sequence of recognizability of color combinations, which the heraldry has determined, has been 100% confirmed by modern studies for the design of traffic signs. Here is the beginning of the ranking:

More than one color and metal should not be used without a reason. Of course, there are also exceptions to the colors in heraldry. If a sign is divided into three colored areas that are all touching, there is no other way than two metals or two colors standing next to each other. (Ex. Rhineland-Palatinate, red and black) Such problems occasionally arise when two or more coats of arms are merged into a single one. In the case of Rhineland-Palatinate, it was the three coats of arms of Palatinate, Trier and Mainz. Even if a shield or a shield figure is, for example, "striped", areas with poor color contrast are almost inevitable (e.g. Hessen, blue on red) 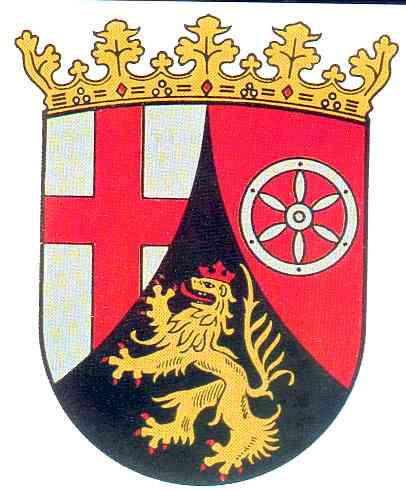 If the colors of the coat of arms can be chosen completely freely, the natural basic color of the depicted object must be used as a starting point. This (or the heraldic color that is closest to the original color) is then the logical choice, such as "red" for a rose (see knight and full coat of arms, above) or brickwork (e.g. city coat of arms of Flensburg), "green "for a plant leaf (linden, oak, ...)," gold "for a bundle of grain or the sun," silver "for the moon or" blue "for a body of water (e.g. Flensburg city arms). 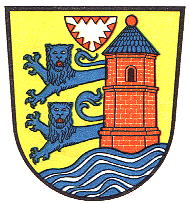 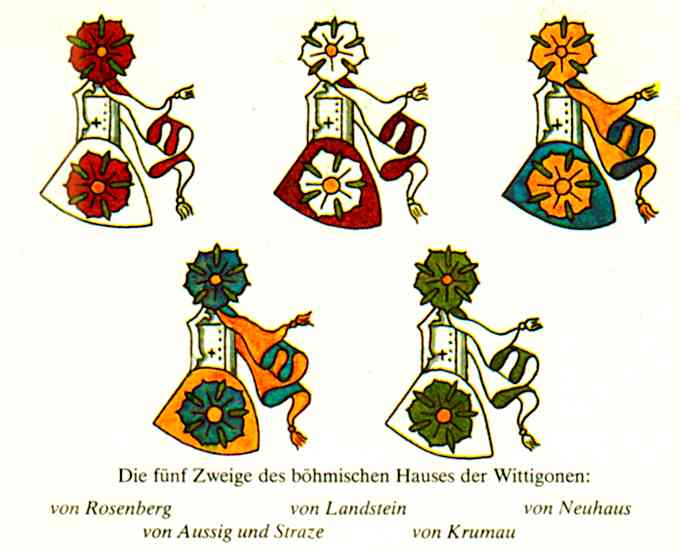 There is actually a lot to be said about helmets. I want to limit myself to the essentials here. The helmet has developed from the conical half helmet ("Norman helmet") to the large pot helmet to stech helmets and tournament helmets.

In coats of arms, royal helmets are usually shown in gold, noble helmets in silver and bourgeois helmets in light gray or light blue (= steel-colored).

The helmet cover was originally a protection that should protect the helmet and thus the head of the wearer from solar radiation. The first helmet covers are hardly bigger than the helmet. Over time, the helmet cover became larger and also protected other areas of the armor. It soon became an important decorative element in heraldry. (see the helmet covers in the development of the coat of arms of the Kingdom of Bohemia)

The splendid crest also developed from small beginnings. These elaborate structures made of fabric, wire and paper mache experienced their heyday at the time of knightly tournaments. The crest can either repeat the coat of arms in the simplest form (cf. "Rose Coat of Arms") or introduce another symbol (cf. Kgr. Bohemia).

The color of the crest is often based on the colors of the coat of arms, but can also deviate from it.

Finally, here is a coat of arms that meets all design requirements. 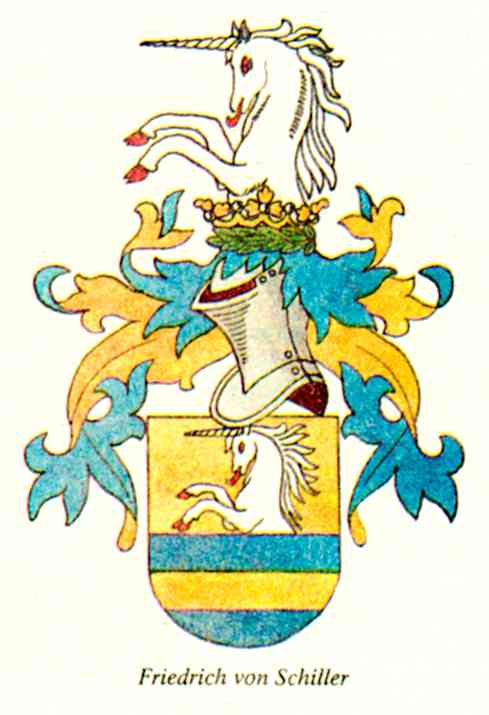