This term comes from Hebrew. The shekel is originally a unit of weight that probably comes from Persia. In Old Testament times there were no coins, instead the monetary value was determined by weighing a precious metal. The talent, mine, shekel and kesita, were based on the Persian units. 1 shekel was 1/50 mine (just under 12 g). Later the shekel was a silver coin of 5.6 g (1/20 Dareike) in Persia.

Only after the Babylonian captivity (538 BC) did the Israelites have minted money, whereby the currency "shekel" has been valid in Israel since 1978.

It is mentioned many times in the Bible, for example in

Exodus 30:10 Each of them who comes to the assessment is to pay half a shekel, equal to the weight of the shekel of the sanctuary: twenty gera to one shekel; half a shekel shall be the levy for the Lord.

Numbers 7, 13: But his offering was: a silver bowl weighing a hundred and thirty shekels, a silver basin weighing seventy shekels according to the shekel of the sanctuary. The shekel is also mentioned in the Book of Kings:

2nd kings 7 Then Elisha said: Hear the word of the Lord! Thus says the Lord: Tomorrow at this time a measure of wheat semolina for one shekel and two measures of barley for one shekel will be sold in the gate of Samaria. "

About Hebrew: Old Hebrew is a Northwest Semitic language, so it is related to Arabic. It was formed when the Israelite tribes, after immigrating to Palestine (14th and 13th centuries BC), took over the language of the Canaanites who lived in the country and mixed it with elements of their previous Aramaic dialect. Apart from the texts found in the Scrolls of Qumran at the Dead Sea, the books of the Old Testament are the only monuments of ancient Hebrew. At the time of Christ it was already extinct among the people, but was preserved as a cultic and literary language (New Hebrew), the oldest monument of which is the Mishnah (around 200 AD). The Zionist movement and immigration to Palestine brought the Hebrew language back to the Sephardic (or Spanish) pronunciation in the State of Israel.

The Hebrew script has been used since the 11th century BC. Demonstrable. It is originally written with 22 consonant characters from right to left.

Let's try to decipher what is written on Israeli banknotes using this table. It's not that difficult at all (don't forget to always read from right to left)! 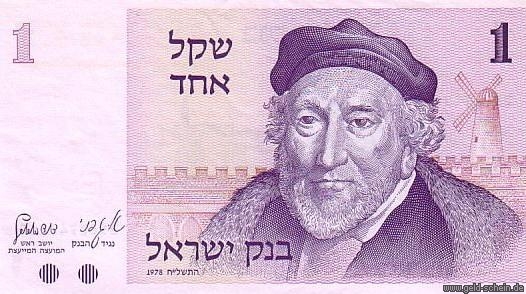 On the left under the portrait you will find the following letters: Bet - Nun - Qoph = BNQ> BANK (the vowels are not written, you have to know them. That may seem difficult at the beginning, but a skilled speaker and knowledge of Hebrew knows which by feeling Vowels where they belong There is no such thing as "Bink" or "Bonk", so it has to be "Bank".

Let's try it on this beautiful note with Shmuel Yosef Agnon: 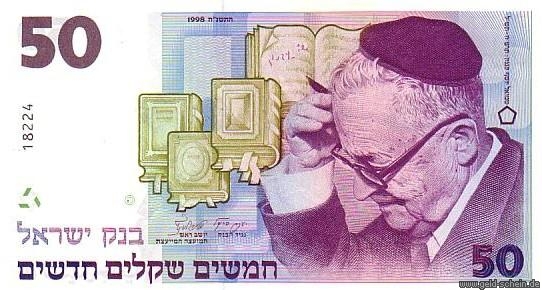 At the bottom left again the well-known BANK ISRAEL And below: He - Mem - Shin - Jod - Mem (note the different memes in the middle of the word and at the end) = HMSCHIM => HAMISCHIM => 50

Let's practice a little more with the currency that was used in Israel before the shekel, the lira: 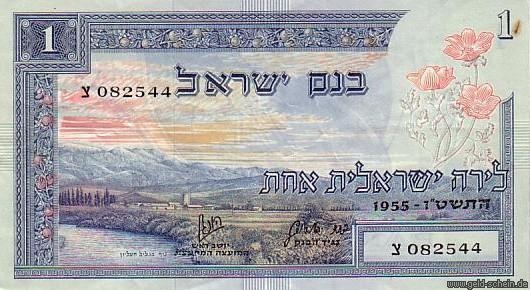 There is the well-known Beth - Nun - Qoph, i.e. Bnq = Bank, and this is followed by the well-known Jod - Sin - Res - Aleph - Lamed = Isral = Israel The value at the bottom right can be read as follows: Lamed - Jod - Resch - He = Lirh (You have to know that the HE at the end of a word is an inaudible sign and only indicates that the preceding consonant (here Resch) is followed by a vowel - i.e. Lira. The following also seems familiar to us: Jod - Sin - Resch - Aleph - Lamed - Jod - Taw = Jsraljt = Israelit The numerical word: Aleph - Heth - Taw = Aht - spoken ächat - and that means in Hebrew * one *. Taken together, this results in Lira Israelit Ächat - One Israelite lira. 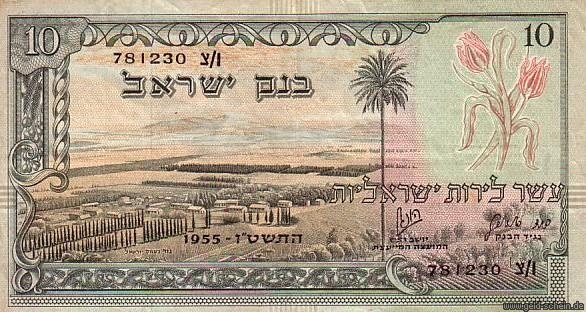 First to the numerical word: Ajin - Sin - Resch = Asr = pronounced "eser", and that means ten. It follows Lamed - Jod - Resch - Vaw - Taw = Ljrwt. The Waw is pronounced in Hebrew like a vowel between U and O = Lirot. Feminine words ending in -a form the plural with Waw - Taw (-OT). The last word is then again Jod - Sin - Res - Aleph - Lamed -Jod - Vaw - Taw = Jsraljwt = Israeljot (adjective is in the plural). Taken together it results in Eser Lirot Israeljot => 10 Israelite lire.

Now you are (almost) ready to read a whole text. If you enjoy it, you can try it here to understand. Here are the words with which the Thorah (the five books of Moses) begins:

In the beginning God created the heavens and the earth, and the earth was desolate and empty (hence the well-known hubbub).