Has Israel gone too far with Palestine?

The new escalation shows: Only if the security of Israel is combined with the rights of the Palestinians can there be a solution to the conflict. 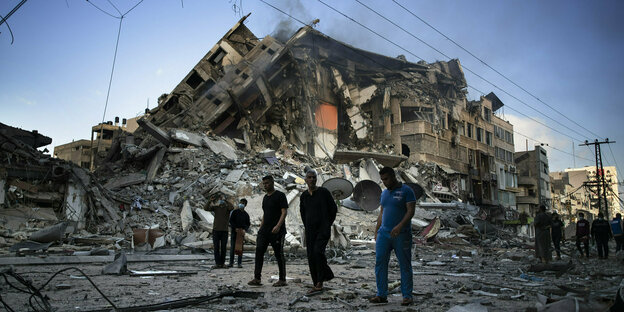 CAIROtaz | It was almost forgotten, the Middle East conflict. Outwardly, little had changed, although the situation of the Palestinians has worsened with each passing year. But that took place beyond the headlines. Even when Donald Trump and his son-in-law Jared Kushner celebrated the normalization they initiated between Israel and the United Arab Emirates and Bahrain as a major new peace initiative last year, the Palestinians weren't even there as extras.

In the last few days the international community has learned that it is not about the relations that Israel has with some Gulf states. The crux of the problem is the conflict with the Palestinians. And their displeasure and frustration with the status quo is expressed in what we are now experiencing. The recent unrest has a new quality. So far it has always been about the Gaza Strip, which is cut off from the rest of the world, or about the rights of the Palestinians in East Jerusalem or in the West Bank, who live under Israeli occupation. Now all Palestinians, including those who live within Israel, are protesting together - with unprecedented vehemence.

"This is not about a two-state solution or territory, but about equal rights as citizens in an Israeli state"

The explosiveness of the newcomers to the uprising, the so-called 48 Arabs, i.e. those Palestinians who live in Israeli territory and make up a fifth of Israel's citizens, became clear through the lynchings and mutual hunting scenes. The boundaries between the territories occupied by Israel and the Israeli state are blurring these days. The conflict with the Palestinians came home to all Israelis this week. With the entry of the 48 Palestinians into the conflict, the Palestinian perspective also changes: This is not about a two-state solution or territory, but about equal rights as citizens in an Israeli state.

What is also new is that the protests in East Jerusalem are no longer linked to Hamas or Fatah. The young people who take to the streets in East Jerusalem represent a new generation that has not only had enough of the daily discrimination. She is also disaffected with her own political leadership - regardless of whether her name is Fatah or Hamas.

No, the Hamas rockets are not hidden here. When the Israeli police stormed the Al-Aqsa mosque in Jerusalem and delivered devastating images that have burned themselves into the collective Arab memory, Hamas sensed its chance to jump on the new protest movement. Over a thousand rockets were fired in the direction of Israel, terrorizing the population and costing innocent civilian victims.

This has a twofold effect: the missiles offer Israeli Prime Minister Netanyahu the opportunity to drag the conflict to where he has more leverage: the military level. And international attention has already turned away from the threatened evictions in the East Jerusalem district of Sheikh Jarrah.

But the international community also followed the Hamas logic. When the Palestinians in East Jerusalem were terrorized by settlers and some were threatened with eviction, she watched indifferently. She only started when the first missiles flew. That is the saddest thing: the Palestinians are only recognized internationally when they cross the threshold of violence.

The rocket fire and the Israeli bombardment will probably end in a few days after American and Egyptian mediation. What remains is the much greater challenge of the protests within Israel. There is no mediation here. That is the rawest nerve in the Middle East conflict.

Shift in the Palestinian discourse

But something else has changed: We are experiencing a shift in the Palestinian discourse and a new generation of Palestinians who are eloquently making room for themselves in the international perception of the conflict. It is a discourse away from territory and the two-state solution towards equal rights between Israelis and Palestinians. Here, too, the old lines of the Palestinians, who live under occupation in the West Bank, are fighting against eviction in East Jerusalem, are isolated in Gaza or live as second-class citizens within Israel, are blurring. The common appeal can be summed up with a “We too have rights”. You compare yourself to the Black Lives Matter movement in the USA and turn it into Palestinian Lives Matter. Instead of the word “occupation”, the word “apartheid” is making the rounds more and more among Palestinians and human rights organizations such as Human Rights Watch. That is also new.

The international reaction to the events of the last few days, however, is old. We hear again the de-content rhetoric that is not really about resolving the conflict. In any case, a first step would be the search for a consensus on reality, without which there will be no real solution. Taking one side on one side and reflexively paying lip service to the two-state solution will not resolve this conflict. Only when the security of Israel is combined with the Israeli occupation of the West Bank, the catastrophic situation in Gaza, the discrimination within Israel and the creeping displacement from East Jerusalem will we begin to talk about a solution.

We can continue to bury our heads in the sand, which has been going well in recent years. But in reality the situation was never sustainable. And it doesn't matter whether you define yourself as pro-Israel or pro-Palestinian.